Below is a letter of complaint submitted today to my most frequently-used airline, Delta, summarizing my worst travel experience to-date. I’ll update this post with any reply I receive.

I am a 30 year old, Silver Elite, business and personal traveler, with a Gold Delta Skymiles AMEX and loyalty to your company that goes back to my youth when you were NWA in Detroit.

After spending a week in sunny San Diego with friends on the beach, watching the ball drop, and even witnessing a dear friend get married, I was tired and ready to get home. My flight from San Diego went off without a hitch, as I have become accustomed to when travelling on your airline. A simple 1 hour layover in the Twin Cities and I’d be home free! That was when, on Sunday, January 5, my connecting flight DL0570 from MSP to DTW was delayed.  For 13 hours.

Was it the weather?  No.

Was it mechanical failure?  No.

I spent from 20:00 to 09:15 in an airport terminal (much with businesses and clubs closed) and hours more on an airplane due to lack of preparedness and laziness, which was topped off by a lack of respect for humans.

The FAA instituted new regulations over the weekend requiring pilots to have a minimum of 30 consecutive hours free from duty each week and 10 hours of rest, including the opportunity for eight uninterrupted hours of sleep, before each flight duty period. Delta and all other airlines had two years to prepare for this rule change.

The massive delays were caused because Delta failing to schedule her pilots properly. Our initial set of scheduled pilots failed to meet the new FAA requirement, meaning that knowledge of their previous duties were documented and known to the airline. This then led to at least 2 other sets of “on call” pilots to be contacted – we know that it was at least two sets, because that was the minimum number to which our gate agents informed us. Each of these sets of “on call” pilots also did not meet the requirements for flying or were too far from the airport or both. This means that Delta did not take previous duties into consideration, rendering their staff of “on call” pilots essentially “off call”.

Hours of additional delays were caused when confusion and/or laziness kept us on a plane for what felt like an eternity after spending the night in an airport terminal like bums on a park bench.

Push Off: When pilots meeting the criteria arrived at 08:45 to fly us to DTW, we were quickly boarded, and the flight plan loaded into the computers. And then we waited – and waited. It was another 30 or 40 minutes before a ground crew came to push us off.

De-Icing: It was extremely cold and the plane had been sitting overnight while we suffered inside, so it needed to be de-iced. That’s not a problem – but it is when you’ve just been sitting at the gate for 40 minutes waiting for a ground crew and you have to wait another 20 to 30 minutes for a de-icing team to arrive and spray you down with chemical salts.

Taxi / Arrival: Finally, we’ve landed safe and sound and we are ready to see our family, friends, loved ones, and our beds (those last two being the same). What happens next? We wait at our gate A36 for about 20 minutes with no sign of a ground crew, only to find out that there is “a problem” with the gate and our actual gate is A31 – on the other side of the terminal. No problem. Let’s take a little taxi ride around the airport. “A31! Home sweet home! And, look, there’s a ground crew member! Halleluiah!” Not so fast. The ground crew member, holding two orange sticks in an ‘X’ pattern is looking around in visible confusion/frustration. He is the only one outside in the windy, single-digit cold. It’s only after another 15 or 20 minutes watching the poor soul, through the porthole window of seat 10A, walk around outside trying to find his colleagues, that 2 others emerge from a tiny garage below the gate to help him.

During situations of crisis or delays, frequent updates are important to keep everyone calm and understanding. In my opinion, we received an adequate number of updates, but the content was unsatisfactory and, in one instance, a tiny bit insulting.

Final update (borderline insulting): (Explains a bit about the FAA regulation as a similar story is airing on CNN in the background) concludes with “it’s a bit too confusing for me to explain to you.” He said it. Just like that. I was 5 feet away from the gate agent thinking, “I’m not a gate agent, but I’m pretty sure I understood what you just said and could understand any more details you felt like disclosing.”

So, after all that, what did Delta do for the poor people of flight 0570?

• Free soft drink after the first delay
• $5 snack voucher after the third delay
• Smelly mats to sleep on were handed out between 00:00 and 02:00 (no idea the cleaning protocol for those — but definitely not as strict as pilot workload)
• $10 breakfast voucher at 07:00
• A $100 coupon off a future Delta flight (Note: See “The Sequel”)

What could you have done better (besides correcting the above)?

• Cancelled the flight so some of us could have slept in a hotel – even if forced to pay for it ourselves – and rebooked us for any of the several flights going out the next day.

• Offered way more than $100 off a future flight. At a minimum you should refund the money and miles that everyone on that flight paid you. At most? Let’s see… you offered me a $600 voucher in addition to another ticket to take a later flight on the way to San Diego, so I guess I’ll go with that: 100% Refund + $600.

Listen, I like you guys. I’d say I do 95% of my air travel through you and choose Delta when all else is equal. I’m not going to flip out and make crazy threats like “I’ll never fly Delta again!!” because that would be ridiculous.

All I’m asking is this: Make it right.

You tell me at the beginning and end of every flight that you appreciate my loyalty – show me. Give me my 40,000 miles back and we will call it even. If the others passengers on my flight can get the same deal, please make that happen too.

Thanks for listening and let’s “Keep Climbing” together.

Update: After submitting my letter online without reply (or even confirmation), calling the “Elite” helpline without callback, Tweeting to @Delta and @DeltaAssist, and posting to the Delta Facebook page, I’ve decided to mail a hard copy of my letter to the CEO, COO, President, and SVP of Corporate Communications. Hopefully, I’ll be able to find someone at that company who cares enough to simply acknowledge a mistreated customer.

Around noon. At long last, I received signs of life from the Delta family.  Samantha responds to my Facebook post: 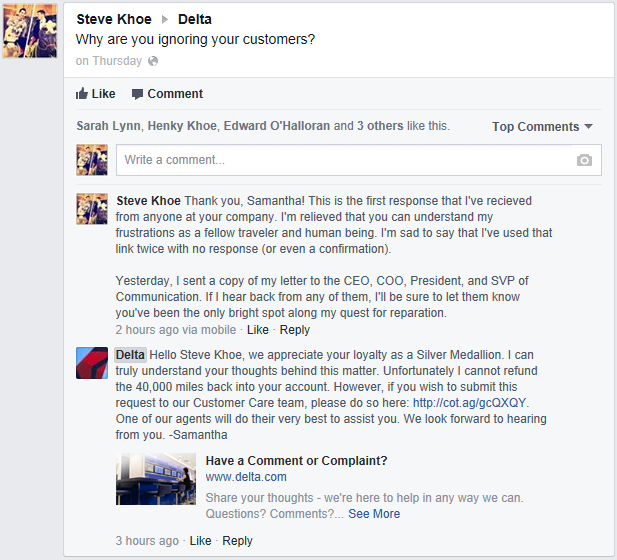 2:10pm. I receive a phone call from an unknown phone number with an Atlanta area code. Her name is LaShawn and she is with Delta corporate customer service.

Soft-spoken and with a sorrowful, defeated tone, she informed me that she had reviewed my complaint and that her company was “sorry”, but that, unfortunately, “no compensation would be available”. I thanked her for the gesture and politely told her that it just wasn’t enough. I was kind. I didn’t blame her. She told me she had made many of these calls and had many more to make — and I could tell she hated it.

So I thanked her again and told her that I would be pressing on until someone with the proper authority gave me full reparations for my incident. I let her know that I had mailed copies of my letter to the top executives in her company and would be sure to mention her kind apology to them if they ever responded. Silence.

“Would you mind if I gave you a call back? I want to speak with my manager. I can’t promise anything.”

“Sure. No promises, I understand.”

“Will you be able to pick up if I call back?”

10 minutes later, LaShawn calls back. Her tone has changed from defeated to victorious. “We don’t always get it right,” she says. And this time, she can do something about it.

She has been authorized to completely refund my 40,000 miles.

We both wish the other to enjoy the weekend — and mean it — knowing that we will. Her for being given the power and doing the right thing; me for….

Rarely as good as the original story, but today I tried to book a flight using the credit voucher we were promised and I ended up having to send Delta another love note:

This is the sequel to a tragic story that had a happy ending.  In Part 1, a flight was delayed by 13 hours in 2-3 hour increments and one passenger (me), after much effort, was able to speak with one of your agents and receive fair accommodation.  In Part 2, I have come to realize that my fellow passengers and I may not receive the peace offering that was promised at the gate.  When we finally boarded flight DL0570, the Gate Agent handed us all a colorful bi-fold with the words “Please Accept Our Apologies” printed on the front and assured us that, if we followed the instructions inside, a $100 travel certificate would be waiting for us.  Today, when I was booking a flight to see my brother’s graduation in May, I remembered the voucher and went to apply it.  There was only one problem — the amount was $50 — half of what was promised.  Now, my outrage at the incident has been assuaged by the outstanding customer service agent who eventually contacted me, but the same cannot be said for the other passengers of that flight.  In this case, doing the right thing means changing the value of everyone’s Delta eCert from DL0570 on 1/5/14 to *at least* the $100 that was promised.  Of course, 90% of the people will probably accept the $50 and forgive Delta and the gate agent without saying anything, but it goes against my principals to see something wrong and not speak up.  Thank you for your help and attention to this matter.