“Some days it hurts so much I can’t even get out of bed.”

That’s when it hits me: this girl is going to die soon.  I’ve never met her before and that’s what she is, a girl, maybe 25 or so.  She is in the middle of explaining to me, in great detail, the many health issues she is facing, but I can’t help but be fixated on the fact that she is going to die. 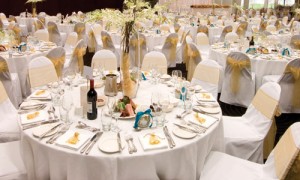 I’m still surprised at how casually the conversation was started.  We’re sharing a table at the wedding banquet for our friends and not everyone knows each other.  I decide to break the ice and introduce myself around the table and others follow suit. As the courses begin to be served, the table starts to make small talk and her, being to my left, does so with me.  I think it started with how we all know the bride and groom and she tells me that her date is actually the one who knows them well.  As we start in on our salads, passing the ranch dressing clockwise, silver flatware begins to clink against crystal glasses: it’s time for the happy couple to kiss.  “Getting married sucks!” my new acquaintance exclaims.  She has my attention.

“Yeah, I hated my wedding, I didn’t get to eat anything! Plus, there is all the walking around you have to do.  You don’t even get to enjoy yourself!”

I’m shocked, but I have yet to realize that she doesn’t hold back anything.  I look at the gentlemen beside her who assured me earlier that we’ve probably met before at “all of the parties”. And she says, “Oh, that’s not my husband, that’s my best friend.  He’s married too.  Did you like your wedding?”  He shrugs.

As we resume eating, I’m not much paying attention to the small talk anymore, but rather guiding my fork full of salad to my mouth without getting any of it on my vest and tie.  Then she says something that perks up my ears, something about some kind of treatment.  What was she saying? She was almost late to the wedding because she was getting treatment for something?  I ask her to repeat herself.  She does.  Most of what she says I don’t recognize, but I’m pretty sure she says chemotherapy or something like it.  Cancer?  Before I can even ask, she assures me that it’s not cancer.  It’s a “cell mass disorder” she says. (Later, I looked it up and she actually said Mast Cell Disorder.)

With almost a sense of relief, I casually ask, “So it’s treatable? It’s not life threatening, right?”

Without skipping a beat, she casually responds, “Oh no, I’m going to die from it.”  I hear the words, but it doesn’t sink in.  For the next few minutes she tells me more about the disease, where the growths are, how she is severely allergic to nearly everything (her epi pen is in her purse and, in case anything should happen, I’m supposed to stick it in her thigh), and the various other health issues she faces in addition to the one that will take her life.  I still don’t believe it.  This girl is younger than I am.

I find out why her husband isn’t with her: “He’s at home.  He doesn’t like these things and he has a broken back.”  What?!  I never even learn how he broke his back, but the person who takes care of her in a sometimes debilitating state doesn’t have a functioning skeletal support system?  She is so matter of fact about everything that I’m nodding and sometimes even smiling slightly.  And then she tells me her biggest concern.  This is the only time in our conversation that her voice really drops.  “They say it could be genetic and I’m worried my son might have it. He’s going in to be tested next week.  It’s sometimes treatable when it’s caught early enough, but I’ve been too scared to have him tested.  He has an epi pen already- (Just in case?) Yeah.”

The conversation is mostly one-sided.  Between my “I can’t even imagine”s and “Wow, that’s crazy”s she fills me in on way more than I would have honestly kept asking about.  She pronounces all of the long words for the diseases, symptoms, and treatments and she speaks with the confidence of someone who has heard them many times.  Most of the words and meanings I’ve never heard before and I know she wishes she never had either.

The conversation doesn’t seem real even as I’m having it.  Someone who is younger than myself dealing with her closest loved ones health issues and ridiculously large medical bills (one of her newest treatments, one of many, will cost over $10,000/year alone), while her body is rapidly destroying itself.  Not only am I trying to wrap my head around the the situation itself, but the matter-of-factness by which she delivers her story to my willing ear and the way she doesn’t care if I know the most personal things about her.  I keep thinking about her husband, her son, and how she is staying strong for all three of them.  What would I be like in her situation?  What is it like to come to terms with death so early in life?  While I’ve thought about it before and imagined my attitude towards imminent death, that’s all you and I can do: imagine.  Imagine then love, pray for, support, listen to, and respect those we might ever meet who no longer have the luxury of imagination.

Days later, I’m still internalizing this conversation with a stranger, a random matching of dinner guests, and the biggest small talk I’ve ever had.