Do I love my car?  Well, admittedly, no.  Even though Fireball’s 330HP fills my tiny heart with joy and my face with a smile — she’s still just a really awesome “thing” that I own.

That can’t prevent her from loving me though, can it?  At least that’s not the message that the marketing team at Infiniti delivered to my inbox.  It was an email about a “customer appreciation” event using social media.  “Fine,” I thought, “I’ll play along.”  So in response to their endearing email and its appreciation of me, I tweeted this:

Every brand on earth uses hashtags — mostly in a desperate attempt to generate conversations about themselves among social networks online.  There’s no hard evidence to back this up, but I’d venture that over 80% of professionally and non-professionally managed social media done on behalf of brands measures on the “bad” scale from simply mismanaged to clueless to egregiously horrible.  In fact, for the worst of the worst, I follow a Twitter account dedicated to satirizing multi-BILLION dollar corporations by simply re-posting their social media accounts — accounts  that are apparently run by 12-year-olds, paid in candy bars and iTunes credits.  (For your own sake, check out their feed: @BrandsSayingBae.)

I’m not usually one to play the hashtag game of marketers and there was nothing especially engaging about this campaign, but it was enough — the layout of the email was simple and sophisticated, the concept was easy to understand, and it was from a brand I liked (even if only for the fact that they kept my bum warm and toasty throughout the record-setting cold of this winter).

So what happened?  Nothing.

By this time, I had completely forgotten about the tweet I’d sent, so I opened the package I with more skepticism than excitement.  “I hope it’s not anthrax”, remarked my roommate, Joe.

Inside the package was a card, hand-signed by the director of aftersales for Infiniti, thanking me for being a customer.  Also in the box, were the following: 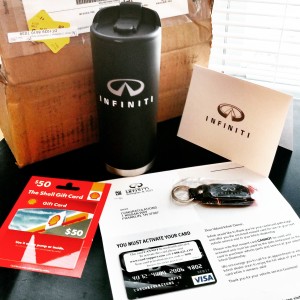 It’s marketing — I’ve studied it and I’ve practiced it and I know the tricks.  But it’s brilliant, nevertheless.  This small gesture feels more like a Random Act of Kindness from a neighbor than a targeted marketing campaign and, for something that costs less than $200 all-in, they could easily see quadruple-digit ROI as I’m just that much more likely to become a repeat customer.

I’m still not ready to say it back, but I’m a slightly more convinced that #InfinitiLovesMe.